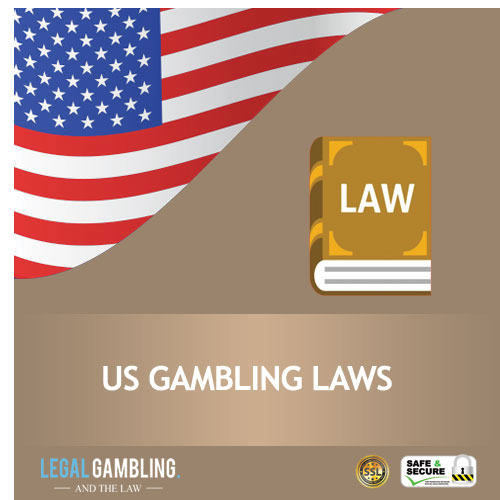 If there is a country in which you need to think twice about the legality of any gambling action, it is most definitely the US. The reason for this is the fact that every state is in charge of gambling regulation or prohibition within its borders.

In the text below, you will find information about:

For the story to be complete, I decided to start this journey with a brief history lesson and lead you straight to the current situation regarding gambling laws in the US.

The History of Gambling in the US

The Vital US Gambling Laws and Acts

The act passed in 1961 with the intention to make placing bets by a “wire communication facility” illegal. The reason the Department of Justice created this act was to prevent organised groups from transmitting bets, wagers, and other gambling-relevant information via telephone, and in that way accumulate large sums of money.

Although the Interstate Wire Act itself wasn’t supposed to deal with gambling, it did cause confusion among people when online betting came into focus. In 2011, the Department of Justice clarified the act by saying that the

This removed the doubt regarding online casino games but left sports bettors disappointed.

PASPA, also known as the Bradley Act, was created in order to make the Wire Act a bit more clear. This act from 1992 did not declare sports betting illegal across the country since this was already done with the Wire Act. Rather, PASPA banned sports betting no matter what method was used and prevented the states from regulating and taxing it.

For US citizens, this didn’t make much sense, but Bill Bradley, who was a Senator, thought that it would stop game-fixing in both college and professional sports. Nevada, Oregon, Delaware and Montana were the only four states exempt from the law.

Even though the law was in effect, that didn’t stop US citizens from betting on sports illegally. That’s why in 2018, the US Supreme Court declared PASPA unconstitutional and left it to the states to regulate the sports betting the way they want.

In 2006, the Unlawful Internet Gambling Enforcement Act was created in an attempt to ban all the gambling activities, but it wanted to strike where it hurts the most.

The law states that:

prohibits gambling businesses from knowingly accepting payments in connection with the participation of another person in a bet or wager that involves the use of the Internet, and that is unlawful under any federal or state law

Some exemptions were made here, specifically some fantasy sports bets, specific skill games, as well as the already existing interstate gambling markets.

While people got scared, thinking that this law proclaimed gambling illegal again, this was not completely true. It only made it difficult for banks to complete money transactions with illegal gambling sites.

The Timeline of Important Gambling Acts and Regulations

How is Gambling Regulated in the US?

The United States of America have complicated gambling legislation to the maximum and caused confusion in the whole country. Although gambling is legal under the US federal law, the country allowed each state to take upon itself the details about gambling regulations.

Therefore, today, every state except Hawaii and Utah allow at least some sort of gambling, but each of them has also banned different ones. The states have their own gambling commissions that decide who and where can gamble within its borders, which is why some of the gambling is practised on the ships that cruise outside the state territorial waters.

Interstate and international gambling has been regulated by the Congress, together with the relations among the US and Native American territories where gambling started taking its toll lately.

In this very confusing system, we can be sure of one thing: no federal law prohibits online gambling. It is legal to place wagers online, but it must be done on a site that is not located in the US. To be on the safe side, before placing any bets, take a minute to reconfirm that the site you chose to play on is based in any other area except the US.

On that account, you won’t have to worry about faking your identity, since most online gambling operators accept American players. Also, international financial institutions have come up with a way to deal with their transactions. However, have in mind that the law is subject to change and make sure you stay up to date with it.

The US gambling market can be perceived as a big puzzle that consists of many small parts, and each of these parts works on its own when it comes to laws and regulations about gambling. Although the situation has changed and keeps changing day by day, it hasn’t yet reached that level that allows you to play games of chance wherever you want in the US.

When it comes to online gambling, the regulations are made mostly for gambling operators and not punters. Yet, to be in the clear wherever you are, it would be smart to double-check the legality of gambling in a specific state before you ask anyone the directions to the nearest casino.

Is gambling legal in the US?

Officially, no federal law in the United States prohibits gambling in general. The individual states are in charge when it comes to implementing laws about gambling.

When was gambling legalized in the US?

Each state legalized at least some sort of gambling at different times. Two of them, though, still don’t accept gambling as legal under any circumstances.

Is gambling illegal in any of the states?

Yes, Hawaii and Utah do not allow any gambling activities at all.

What is the legal gambling age in the US?

In the majority of US states, 21 is the legal age when it comes to gambling. However, in some of the states, 18-year-old citizens can take part in some gambling activities.

Who regulates gambling in the US?

Since each state is responsible for taking care of gambling laws and regulations, they all have their own gambling commissions for this activity.

Anyone who is 16 or over may participate in Bingo and other charitable games.

Is online gambling legal in the US?

There is no federal law that forbids online gambling in the US, as long as the site is not based on US soil.