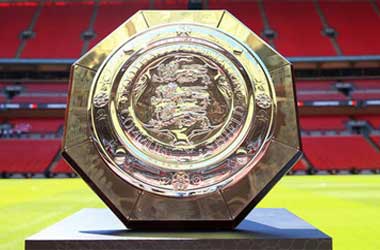 Every year, the English Premier League raises the curtain on another season with the Community Shield match.

The game dates all the way back to 1908 when it was won by Manchester United, who has a record 21 victories in the Community Shield.

Bet On Liverpool vs. Manchester City On Our Best To Sportsbooks

However, since Liverpool finished second in the league standings, the Reds will have the honor of being the second team in the Community Shield.

Following last season’s epic title race between these two teams, the Premier League couldn’t ask for a better matchup to kick off the 2019-20 campaign.

A year ago, Manchester City began the season by winning the Community Shield. They proceeded to win their second consecutive Premier League title, as well as the FA Cup and League Cup, taking home all four domestic trophies. It’s not surprising to see Pep Guardiola’s club once again favoured to win the Premier League again this season.

Other than longtime captain Vincent Kompany departing, Manchester City returns largely the same squad as last season. The one big addition has been Spanish midfielder Rodri, who figures to make City even stronger in the middle of the field.

The Citizens can also expect a better season from Kevin De Bruyne, who was far from his best last season because of injury. However, he should be fully healthy after getting the summer off, and when he’s healthy De Bruyne is arguably the best player in the Premier League. Those two should dominate the midfield for City, creating plenty of scoring opportunities for the likes of Raheem Sterling and company up top.

Despite finishing one point behind Man City, the Reds didn’t walk away empty-handed, winning last season’s Champions League, earning the title of the best team in Europe. However, after coming up short in the title race last year and knowing that they will likely be chasing Manchester City for the Premier League title this year, the Reds will be looking to make a statement in the Community Shield. They will also be eyeing their first domestic trophy since 2012.

Much like Man City, Liverpool also returns largely the same squad as last season. They made only two signings this summer, and both additions were teenagers who probably won’t see many minutes with the first team this season. However, they are set to be without Sadio Mane and Xherdan Shaqiri in the Community Shield. Mane is still recovering from a busy summer with Senegal at the Africa Cup of Nations while Shaqiri is battling an injury. The absence of those two players will put more pressure on Mo Salah to create and finish scoring chances for Liverpool.

With the two biggest heavyweights in English soccer playing one another, it’s a virtual guarantee that both sides will give a strong effort in this game. But Liverpool has struggled during their preseason schedule, which is a concern.

Meanwhile, City has a trophy-winning pedigree under Pep Guardiola. We predict Manchester City will win the Community Shield.