Predictions For The NFL Thanksgiving Day Games with Latest Odds 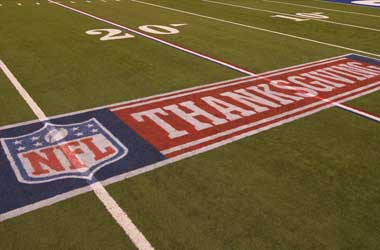 Thanksgiving and football are a perfect match since there is no other sport that is uniquely linked to a holiday across the USA. The NFL 2021 Thanksgiving slate includes a three-game schedule Las Vegas Raiders @ Dallas Cowboys, Buffalo Bills @ New Orleans Saints and Chicago Bears @ Detroit Lions.

The NFL is currently deep-rooted in the Thanksgiving holiday traditions for many families, so betting sites are getting ahead of the coming games by posting some competitive odds early enough for all three games.

The slate for this year will not disappoint at all. While the game between Detroit Lions and Chicago Bears may be a downer, you will be able to see the thrilling and evolving growth of other teams on the national stage. The teams in the other two matchups are all in the NFL playoff race.

With so many sportsbooks offering the best odds and generous deals on all NFL Thanksgiving games, you can make your day a memorable one by placing a bet.

Top-Rated Sportsbooks to Bet on the NFL 2021 Games

To enjoy some highly rewarding bonuses and promotions and take advantage of competitive odds, you can pick the best sportsbooks from the following list of top-rated sites.

Before you can place your first bet on any of the NFL Thanksgiving 2021 games, you need to have some tips that can help you boost your chances of winning.

The first proven tip is to deeply understand all the participating teams, including their respective star players, the latest injuries, suspensions, form, and the latest odds from the leading sportsbook in the sports betting world.

Chicago Bears is struggling to find a spot in the playoffs, but Justine Fields has its supporters excited about the future. And when it comes to the Detroit Lions, the team is yet to win a match, but it has enough talent to give Chicago Bears a hard time.

Chicago Bears has won all of the six out of seven games that it has played against Detroit Lions. But the Lions are known to run the football, and it is something that it does better. So Chicago Bears will be ready to handle this.

Chicago Bears come to the 2021 NFL Thanksgiving Day kickoff match on a roll, having emerged the winners of four straight games both against the spread and straight up. However, its win streak has not come against stiff competition. It has defeated the Vikings and the Lions.

Back to this game, whether it’s Tim Boyle or Jared Goff in the middle of the Detroit Lions, the Chicago Bears should be the favorites to win the game. While the Chicago Bears team will try its best to salvage its season and attempt to make a run at the Wild Card dock, its important goal of the year is to ensure the growth of Justin Fields, the rookie quarterback. After a bumpy start, Justine Fields is now showing some great performance, and he will help the team during this game.

Chicago Bears also has the best defense in the NFL with 77.8 yards allowed per match, and it is in the third position in terms of D overall 314.4 YPG. This game is a simple one for Chicago Bears as it is facing one of the lowest-ranked teams in the league with a scoring offense of 22.2 PPG.

When it comes to the Detroit Lions team, it has been a disappointment across the campaign. However, this team can be able to pull a surprise since winning sometimes depends on pure luck.

It has a few average players, such as Romeo Okwara and Trey Flowers.

If a team is an underdog, but good luck is on its side, it can emerge the winner, especially when every player provides the best.

This is game two of the 2021 NFL Thanksgiving Day slate. The game will be an amazing one, and it will provide some memorable moments for both punters, fans, and players.

While the Dallas Cowboys team is the number one scoring offense in the National Football League at a 31.60 PPG rate, the Las Vegas Raiders’ offense enters the 11th week ranked number 23 in PPG (23.30). These two teams need this match for different important reasons, and that is why you should expect firepower.

The Dallas Cowboys team is fighting for the number one seed in the NFC as it is currently slated as the number three seed. For now, the Las Vegas Raiders team is on the outside looking in, and it has an AFC West title or a Wild Card dock in its sight.

Surprisingly, the defense of Las Vegas is ranked number 10 with just a few points surrendered in a match at a 21.70 rate. Also, with 17 points, the team is 5th in takeaways. Yannick Ngakove and Darren Waller are fit for this match, and they are among the players to watch.

If the Dallas Cowboys team manages to balance both sides of the game, it will find it easy to pull out a massive win.

The best part is that the defense of the Dallas Cowboys team is tough enough to stop any threats from the Las Vegas offense team.

On top of that, the team is now healthy, as key players, including Ezekiel Elliot and Dak Prescott, are back.

If the season ended today, this game is the only one that features teams in the playoffs. But the odds of Buffalo Bills indicate that it is the favorite.

The Buffalo Bills is one of the top-rated teams in the AFC, and it will be looking to win this game. On the other hand, the New Orleans Saints squad will be looking to bring something to the table. Expect some thrilling moments when you place a bet on this particular game and watch it live.

While the Buffalo Bills team is currently sitting at the number two seed in the AFC, it isn’t flawless and has shown some signs of being defeated. Its defense has been reliable compared to the offense, and that comes as a surprise to many supporters and fans.

For the Buffalo Bills to win this match, it needs to be strong in all areas, including the passing game that it has not always done excellently across the season.

The New Orleans Saints team has the best defense in the NFL, and the offense of the Buffalo Bills is one-dimensional, as it struggles to run the football.

If the defense of the Saints manages to stop the run, it will have a massive shot at holding Josh Allen and the slew of weapons that he carries in a competitive game. And this will close the match.

The New Orleans Saints team already has an NFC Wild Card spot. The team is getting the job done easily by playing sound defense and running the football, not to mention the savvy management by Sean Payton.

If the match is close at the end, the Saints will be the favorite team. Whether it’s Alvin Kamara, Mark Ingram, or both playing in the backfield, they run smoothly to move the chains while winning the possession at the same time. The New Orleans Saints has played on Thanksgiving Day several times, performing well in just a few games.

The Thanksgiving Day is a fabulous time to shop around before you can place a bet, and there’s no better place to find competitive odds and the most generous deals than at the sportsbooks provided above. So who are you backing in each game? Pick your favorite sportsbook and NFL team and place your bet today while the odds are still competitive enough.