Best Odds & Predictions For The NBA All Star Game, Chicago 2020 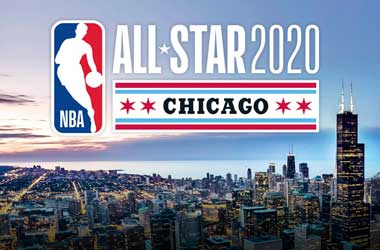 The 2020 NBA All Star is set to take place at the United Center in Chicago, Illinois on Sunday, February 16.

The city of Chicago is a great host city in the state of Illinois for this event, but unfortunately there will be no Bulls’ players in this game. Even though this game symbolises the halfway point of the NBA season, most NBA teams have just 30 games or so remaining.

The NBA All Star Game will be utilising a different format this year, and it will be interesting to see how it impacts betting. Each of the first three quarters will be their own “mini-game”, and the score will be reset before the fourth quarter. This could create some extra drama and excitement for the NBA All Star Game, but there will be plenty of great players taking the floor.

It will once again be Team LeBron taking on Team Giannis in a rematch of last year’s game.

Bet On NBA All Star Game 2020 With The Following Sportsbooks

Giannis Antetokounmpo led all scorers with 38 points a season ago, but it was not enough to help his team get the win. Team Giannis 178-164 defeat at the hands of Team LeBron, and the reigning MVP will be looking to get some revenge in this game.

Kevin Durant took home All Star Game MVP honors a season ago, finishing with 31 points to lead Team LeBron to victory. LeBron James is now 2-0 as a captain of the All Star Game, and is the only player to register a victory as a captain since the new format began.

There is definitely a major difference in the rosters from each team, and Team LeBron is going to have a massive size advantage. LeBron James leads the way for his team, and he is averaging close to a triple double this season with 25 points, 8 assists and 8 rebounds per game. James used his first selection on teammate Anthony Davis who is also averaging over 26 points and 10 rebounds per game. This dynamic duo has been carrying the Los Angeles Lakers, and should be a tough tandem to stop in this game.

Kawhi Leonard of the Los Angeles Clippers, James Harden of the Houston Rockets, and Luka Doncic of the Dallas Mavericks round out the starting lineup for Team LeBron. Both Doncic and Harden are scoring more than 30 points per game this season, and they could take over a game if needed. Damian Lillard, Russell Westbrook and Jayson Tatum are three other interesting pieces on this roster that will come off of the bench. Team LeBron is huge, but they should be able to really score the basketball.

Giannis Antetokounmpo does his damage in the paint, and he wanted to surround himself with some shooters, and that is exactly what he did. Antetokounmpo is averaging more than 30 points per game, and he could easily go for another 38 points in this game. The “Greek Freak” will be joined in the starting lineup by some terrific players from the Eastern Conference. Joel Embiid, Trae Young, Pascal Siakam and Kemba Walker can all score in a variety of ways, and should give Antetokounmpo plenty of support.

Team Giannis will have to find a way to defend the paint, but their bench is not very big either. Jimmy Butler and Bucks teammate Khris Middleton should provide plenty of bench scoring for Team Giannis, but defense is going to be an issue. Even though points are going to be aplenty in this game, finding some defense could be a key for this team.