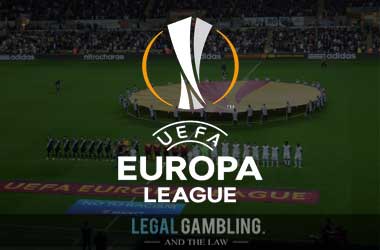 The Europa League is made up of teams that have qualified through a knockout system. Each of the participating teams will play opponents twice, once at home, and once as guests of the opposing team.

Those that play in the same football association are unable to play against each other, and the team that scores the most goals between the two matches will then advance to the next stage of qualifying.

In this article, I discuss the various competitions which you can place bets on, explain the Europa League, include betting strategies and tips, examine the legality of Europa League betting and provide answers to some commonly asked questions relating to the Europe League.

I further add why I believe placing bets on this league is recommended and include a list of recommended legal Europa League sportsbetting sites.

The first qualifying round sees ninety-four teams participating. This is made up of twenty-five domestic cup winners from associations twenty-five through forty-nine, thirty domestic league teams that were runner up’s from associations eighteen through forty-eight and thirty-one domestic league teams that placed third. Forty-seven of the teams in this round will advance to the second round of qualifying.

The Playoff round will see a total of forty-two teams. They will include ten winning Champion Path teams from the third round of qualifying, six Champions League losing teams and twenty-six League Path winners from the third qualifying round.

Football is by far, the most popular sport in the world today, and with its popularity, there is a great number of different ways to place bets on football, and in particular, the Europa League. Below we highlight a few of the more popular betting options.

Betting on the Group Winner

This is one of the most common bets placed in the Europa League. This will see bettors placing a wager on who they think will win one of the top positions in the Group round. This will see sportsbooks placing odds on favoured teams and will rank each based on previous results.

Winner of the Europa League

Choosing the winner of the Europa League is another popular bet made by punters. This is a simple bet that only requires you to select the team that you think will win the Europa Cup. Odds are based on a number of factors such as how teams performed throughout the league and how they finished in the qualifying rounds.

One of the harder bets to place, but one that is popular is the score/win bet. This requires punters to pick a favoured player that you believe will score a goal. In order for this bet to win, the player must be score a goal and be on the team that wins the match. Odds for this style of bet will be fixed and be based on the players scoring history and their respective team’s chance of winning that particular match.

Winner of a match

This is a simple bet but one favoured by many. It simply requires selecting the team you believe will win one of the matches. If you choose correctly, you win, if not, your bet is lost. Odds are based on the usual factors such as past match performances.

Betting in football is not as simple as picking a team and hoping for the best. It requires the punter to exercise caution and remove the emotional factor from the equation. That is done by investing time in reaching each of the players on the team you are favouring and then understanding their strengths, weaknesses and past performances. In doing so, it will give you a solid picture of what you can expect, or at least, anticipate as to whether the team you are favouring is the best bet for your money.

Teams playing with the advantage of being at home makes a difference. It has a huge impact on the level of support they receive from fans and this is most certainly a factor when cone considers the passion that Europa League fans display. While it is not the only defining factor as many teams perform well when on the road, it certainly is one that must be factored into the decision making process.

Player injuries is another are that one should study carefully. Each player has his unique qualities that they bring to a team, and if one of those has been injured, it can change the balance of the team and this can and will have an impact on the teams overall performance. This can be in the form of this ability to win against an opposing team but also can impact the team psychologically.

First and foremost, do your research. You can read all the tips you want on how to bet on football, but if you do not take time in researching the league, each of the teams and their key players, your odds of long term success will be seriously hampered. Research stats on a regular basis, understand how those stats relate to team performance and place bets on facts, not emotions.

Football is a sport that holds immense popularity throughout the world, and as such, there are few boundaries that prohibit placing legal bets on the Europa League. The legality of betting in this regard relates to the geographical location you are residing in, and that will require you to investigate the laws in your country and how they relate to gambling, whether online or offline. One example is the United States, while they do not make betting online illegal, they do make the transferring of monies for the purpose of gaming illegal with offshore operators as it falls under the Wire Act.

If you live in a country that has restrictions relating to offshore gambling, you still will find some sportsbetting sites that will accept your wagers, however doing so is not recommended as if you have a problem when withdrawing your winnings, you will not have any recourse that you can take in order to get paid.

Therefore, it is imperative to investigate the legality in your country, and then once confirmed; you legally are allowed to place an online wager. Then you need to ensure that the sportsbooks you register with and subsequently place bets with are ones that are licensed by respected gaming authorities such as the Kahnawake Gaming Commission, the Alderney Gaming Control or the Malta Gaming Authority. This will ensure that those you are playing with, and those we highly recommended are responsible acting sportsbetting sites that act responsibly, retain your deposits in separate accounts and will pay winnings promptly. The legal sportsbooks you see on this page all meet those requirements, and you have our assurances on their legitimacy.

How can I purchase tickets for a Europa League match?

Tickets for Europa League matches are available at a retail sales outs throughout Europe. In addition, they can be purchased directly on the UEFA site.

What is the origin of the Europa League?

The Europa League came about from the Inter-Cities Cup, a European football league that was in effect from 1955 to 1971. Initially, it had eleven teams but grew to 64 before being taken over and renamed as the Europa League.

Which teams have won the most Europa League championships?

Why I recommend betting on the Europa League

The Europa League is a professional league that offers a great deal of entertainment, but also a wide range of professional teams that are at the top of their respective leagues. With such a large number of matches to wager on, the level of action is constant, and this provides a great many opportunities to place bets, and see profits.