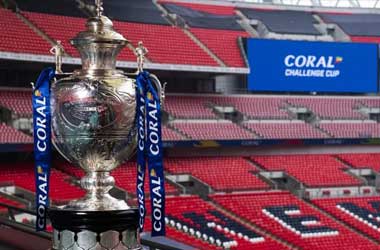 The 118th Rugby League Challenge Cup final will bring about a remarkable first for the game.

This is because, despite the illustrious history of the pair, it will be the first time that Warrington Wolves and St Helens have met in the final of this prestigious old competition.

And yet, whoever comes out on top, the Challenge Cup will be in familiar hands as Saints and Wolves have lifted the famous old trophy 20 times between them, even if recent years have provided something of a drought for the pair.

Saints last lifted the cup as long ago as 2008, while Wolves last triumphed in 2012.

Let’s take a look at who you should consider when you go to bet on this affair coming up later this week!

Bet On Warrington Wolves vs. St Helens On Our Best To Sportsbooks

The Challenge Cup final will be played at London’s 90,000 seater Wembley Stadium and will get underway on Saturday afternoon – August 24th.

To reach the final, Warrington beat Hull 22-14 in their semi-final, while St Helens overcame Halifax 26-2 in theirs. In the most recent meeting between the two, Super League leaders St Helens enjoyed a third victory of the season against Wolves, also known as The Wire, running out their Cup final dress rehearsal in style as comfortable 30-12 winners.

Warrington come into the match on a run of five defeats in their last six games and also have Tom Lineham suspended plus a raft of other top players injured. Likely to be missing for The Wire are Dec Patton, Daryl Clark, Jack Hughes and Mike Cooper as well as star player and 2019 Man of Steel contender Blake Austin.

The most interesting development, however, is the loan signing of former Saints and Wigan star Matty Smith, who has joined Wolves on loan from French side Catalan Dragons until the end of the season.

St Helens-born Smith is a two time Grand Final winner and will come into the side as a direct replacement for Austin to provide some hope for a Wolves team that are contesting their third Challenge Cup final in four seasons and second in a row. Should the Wire win Saturday’s showpiece final, it would be their ninth Challenge Cup win in their history while also putting to bed last year’s Wembley defeat by the Catalans.

Saints go into the clash having already won their first trophy of the season, the 2019 League Leaders Shield. In what has been a breath-taking season so far, coach Justin Holbrook’s all-conquering side are on target to win a domestic treble of the League Leaders’ Shield, Super League and, of course, Saturday’s Challenge Cup. Form wise, Saints have lost just three in 25, banking over 800 points while conceding less than 370. They are also 16 points clear at the top of Super League, such has been their superiority this year.

That said, this is their first Challenge Cup final since 2008 so Wolves must hope that the occasion, and/or the venue, gets the better of them. But, at the time of writing, they have no injury concerns over star names Lachlan Coote, Tommy Makinson, Theo Fages, Kevin Naiqama and Jonny Lomax, so there is very little reason back against Saints this year.

Warrington coach Steve Price believes St Helens are the biggest favourites to win the Challenge Cup in the competition’s history. Saints have seen off The Wire three times already this season and to make matters worse, the Wire are likely to be missing star man Blake Austin. Warrington have impressed this season but Saints look a different class and will be expected to take the trophy at Wembley on Saturday.