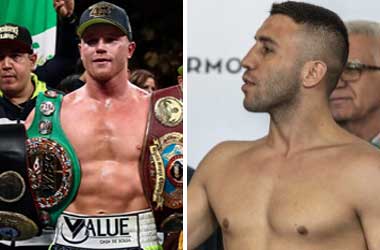 Saul “Canelo” Álvarez will look to defend his WBA (Super), WBC and The Ring super middleweight titles as he faces a mandatory challenger in Avni Yildirim at Miami’s Hard Rock Stadium on February 27.

You can catch the fight broadcasted live on DAZN in all territories excluding Mexico.

This will be Alvarez’s first match since his victorious unanimous decision over previously undefeated Callum Smith back on December 19. He was able to win the WBA and vacant WBC titles.

Saul ‘Canelo’ Álvarez enters the ring with an improved record consisting of 54 wins, with one loss and two draws. More impressive, he has 36 of those victories coming by knockout.

His only loss on his resume is the defeat against Floyd Mayweather Jr. But since that defeat, Canelo has put together 12 wins and one draw.

Canelo was recently in action last month, when he soundly dominated against unbeaten Callum Smith over twelve rounds. This allowed him to capture the WBC and WBA titles.

Yildirim steps in as the mandatory challenger to the WBC’s title. He is currently ranked second in the WBC in the 168lb division.

The Turkish opponent is arguably a tough fighter that has only lost two out of his 23 fights. Despite being the mandatory challenger, he will have one of the toughest challenges of his career in Canelo.

Yildirim has defeated three of his last five opponents. One of those fights ended by stoppage and he has gone the distance twice.

Looking at his last matchup, he was defeated by Anthony Dirrell back in February 2019 by technical decision. This bout was the WBC World Super Middleweight championship fight, so he does not have a lot of momentum heading into this one.

Avni Yildirim has a slight height advantage of about two inches on Canelo. However, both fighters have the same reach and Canelo has excelled against taller fighters.

Canelo appears to have it all when it comes to his boxing. He has the ability to box smart and can comfortably go the distance. Then at any moment, it seems he has no problem demonstrating his punching power and can end fights in a hurry.

In 2017, Chris Eubank Jr effortlessly handled Yildirim inside of three rounds. Nothing to discredit Eubank Jr, but he is not the same level as Canelo. With that being said, what could possibly happen once Canelo gets a hold of him?

Canelo will open this fight with poise, patience, and dominance. You will see his strategic use of time over the opening two or three rounds, and unfortunately for Yildirim, use him like a punching bag.

Then, this will all come to an end before he unearths power and ends this fight before the arrival of the fourth round. This could potentially make its way to the sixth if Yildirim has trained enough in his two year absence.