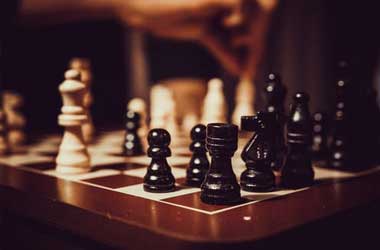 Chess is a strategy board game played by two players. The chess board is comprised of 64 square-shaped fields, half of them black and half of them white, that are arranged in an 8×8 playing grid. Both players start with multiple chess pieces, each of them moving differently across the board, and the objective of the game is to checkmate the opponent’s king.

Chess has a really long history — it is believed that it originated somewhere around the 7th century from an Indian game called chaturanga. In time, chess gradually gained in popularity. During the Renaissance, it was known as the King’s Game and was used to teach nobles war strategy, while during the Age of Enlightenment it was used as a means of self-improvement.

As technology developed, programmers worked on creating chess engines that turned out to be very hard to beat, even by the most experienced chess players in the world. In 1997, one of those chess engines even managed to beat a reigning World Chess Champion, Garry Kasparov. While that caused some concern about these engines being used to cheat in tournaments, it also significantly improved the popularity of chess and introduced the game to a broader audience.

First modern chess tournaments were organised during the early 1800s, and they were followed by the establishment of FIDE (the World Chess Federation). In today’s time, there are numerous chess tournaments around the world, which presents an excellent opportunity for those who closely follow chess to bet on their favourites.

Whether you’re new to chess betting or betting in general, you’ve come to the right place — we will help you learn everything you need to know about the biggest chess events and types of bets you can place on chess, as well as give you some tips and tricks that will, hopefully, help you place a winning bet.

Betting on chess might not be as popular as betting on some of the most televised sports, such as football or basketball, for example, but there are still numerous sportsbooks around the globe that allow you to bet on this sport. However, we’re not going to let you bet anywhere. Our team over here at Legal Gambling and the Law is comprised of seasoned betting experts, and we’ve prepared a list of sportsbooks that provide the best odds and the best offers when it comes to chess betting.

If you have never followed chess closely before, you might be surprised by the number of chess tournaments out there. One thing to know is that while many of the popular chess tournaments are recurring, there are many more “spontaneous” ones organised throughout the year.

The Chess World Cup was formerly known as the Grandmasters Association World Cup. In 2000, it was renamed to FIDE World Cup, and it holds the same name ever since. However, in 2005, the format of the tournament has changed. The tournament is held every two years, and the single-elimination format includes 128 players. It is considered one of the most prestigious chess tournaments.

Grand Prix is a series of four different chess tournaments. The tournaments are a part of the qualification process for the World Chess Championship, and the two top finishers also qualify for the Candidates Tournament. Every tournament consists of 16 players, and there are 21 contestants in total. Each of the contestants plays in three of the four tournaments. Every Grand Prix has a knockout format, and at the end of each round, the players play the best out of two matches.

The so-called super-tournaments are often sponsored events. They are also invitationals, meaning that only the invited players can participate. Depending on the organisation hosting the event, we can expect to see different people participating every time. These tournaments are held throughout the year, and some of the most popular ones recently have been Wijk aan Zee, Norway Chess, Sinquefield Cup, London Classic, as well as Dortmund, Bilbao and Zurich tournaments.

Betting on a match winner is one of the most common bets in general, not only in chess. As the name suggests, it allows you to place a bet on the winner of a match. The majority of chess tournaments are single-round eliminations, so this type of bet is also the one you will encounter most frequently. As is the case with many other bets, the odds vary on the sportsbook, the players, and the stage of the tournament.

Chess is a game of strategy, which means a match can often be decided by the first move a player makes. There are numerous chess strategies out there and, depending on the sportsbook you choose, you will be able to bet on the opening move. In other words, you can try to guess which strategy the player is going to use and what the first move they’ll make will be.

Betting on the number of moves is another type of bet that can greatly depend on the strategy that both players are going to use. The rules of the bet may vary depending on the sportsbook, but, generally speaking, a move starts every time the white player finished moving his piece.

Teams to Be Relegated

Some tournaments involve teams of players and, naturally, as the name suggests, this type of bet is reserved for betting on chess teams rather than chess players. It is similar to the outright bet, as it allows you to guess which team will be relegated to the next stage or phase of the tournament.

Chess is a battle of minds that involves a lot of strategizing and experience (unless you’re a prodigy). In general, placing bets is easy, and chess betting is no exception. However, in order to boost your odds of placing a winning bet, you should use various strategies. If you don’t know where or how to start, there’s nothing to worry about — we’ve prepared some neat tips and tricks you can use to potentially increase your odds of winning.

The ELO rating is a system used by various organisations to estimate the strength of a team or a player. The system is based on their performance against other players and is approved and used by FIDE. It displays brief information about the player, such as their age and nationality but most notably, it includes information about their rankings for classic, rapid, and blitz chess types.

It is a fantastic tool you can use to your advantage. Another thing to pay close attention to is the recent ELO changes — they can give you an insight into players’ recent performance.

Another thing that can significantly boost your chances of placing a winning bet is doing some research. As we’ve mentioned previously, chess is a highly strategic game. Therefore, you should make sure you’re keeping up with the players’ recent performance, just like you would with the ELO rating. However, instead of focusing on the ELO increase and decrease, you should focus on players’ openings, their recent inspiration, and the strategies they have used recently.

Comparing the odds is such an obvious step, but a lot of players skip it. There are countless sportsbooks out there, and each of them offers different odds. Naturally, there are those that continuously offer excellent odds, but the competition between sportsbooks is fierce, and no bookie has the best offers all the time — they vary from match to match and tournament to tournament.

By comparing them, you can ensure that you are placing the most profitable bet. It might not net you a fortune instantaneously, but it adds up down the line.

If online betting is regulated in your country by law, and if you are betting through a licensed sportsbook, chances are that you won’t have any issues betting on chess. However, just to be on the safe side, make sure to check out the details of online betting in your jurisdiction to avoid any trouble with the law.

As you can see, there are plenty of options when it comes to betting on chess. Hopefully, our article will save you precious time and help you find the best sportsbooks, the best odds, and the best betting markets. Regardless of the choice you make, we wish you the best of luck!

Are the odds on chess any good?

Yes, they are! Naturally, the odds vary greatly from one sportsbook to another and from one tournament to the next one, but we’ve made sure to introduce you to the best odds out there.

When are chess tournaments played?

Chess tournaments are played throughout the year, so there are always some high-quality chess games to bet on.

Who is the best chess player to bet on?

There are many well-known names out there, such as Caruana, Ding Liren and Giri. However, the name that has been dominating the chess scene lately is Magnus Carlsen.

Where can I bet on chess online?

There are many sportsbooks that offer you to bet on chess nowadays. However, if you are looking for the best one, make sure to check out our list of the best betting sites.

Generally speaking, as long as online betting is legal in your country, betting on chess should be legal as well. However, just to be on the safe side and avoid issues while withdrawing your winnings, check if you can legally bet on chess in your jurisdiction