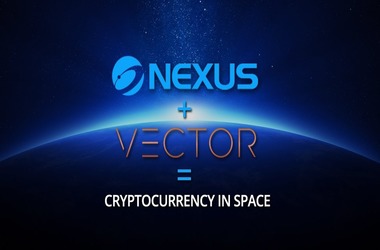 Block chain technology company Nexus and Space company Vector has announced a partnership to host the former’s decentralized crypto currency on a satellite. The task is planned to be accomplished in the GalacticSky platform of Vector, which is considered as a potential SpaceX competitor.

Nexus stated that its platform offers improvements over Bitcoin, Ethereum and other block chain networks. As an example, Nexus underlined that its system features SHA-3 cryptography with 571-bit keys that can offer “quantum security” against attacks on next next-generation quantum computers. Nexus is currently developing a “3D Chain” (3DC) to resolve issues related to speed and scalability in the crypto currency industry.

Nexus’ future infrastructure based on satellites and mesh network is expected to lead the industry towards decentralization of the internet.

The GalacticSky platform of Vector was launched in 2016. It is a “satellite virtualization platform,” facilitating customers to test new space applications using satellites already in orbit, rather than undergoing the costly process of launching satellites for test purposes. The platform enables users to reconfigure existing micro satellites dynamically and in near real-time, similar to the software-defined radio systems. May be for this reason, Vector describes GalacticSky as a software-defined satellite platform.

With a successful launch of this project, Nexus crypto currency will be based on space and its block chain will be distributed across multiple satellites. That means, Nexus will not be tied to any country and can create a near perfect decentralized financial ecosystem.

“The capabilities provided by the GalacticSky platform, combined with the flexibility of Vector’s launch model, bring us one step closer to accomplishing our mission of providing the world with a decentralized currency that can be accessed virtually anywhere, anytime.”

“Housing Nexus’[s] cryptocurrency on our GalacticSky platform not only validates our proof of concept, but demonstrates how prolific this opportunity is for startups looking to innovate in space without the need to build their own satellite.”