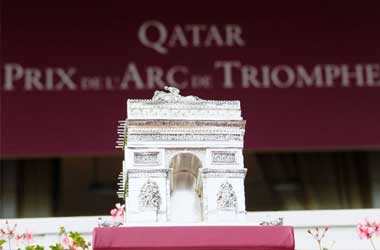 The highly anticipated 2019 Prix De I’Arc de Triomphe (G1) is set to run on Sunday. After running for 99 years, Enable could make history by becoming the first horse to win it three times.

The Arc is a Group 1 flat horse race that is open to thoroughbreds that are three years or older. It takes place in France at Longchamp, and the distance is about 1 1/2 miles.

While the famous Breeders’ Cup Turf dates back to 1984, the Arc was first run in 1920, and it is still waiting to see a horse take it three times.

Best Online Sports Betting Sites To Bet On The Arc 2019

Horses To Watch Out For

One of those wins was the Yorkshire Oaks at York’s Ebor meeting last month. She was able to beat the Aidan O’Brien-trained Magical. That race marked Enable’s tenth Group 1 success. Enable is set to be the heavy favourite, and her current odds are at 8-11. She will be going against history, but Enable has a solid shot at becoming the first to win the event three times.

Japan will be representing the Aidan O’Brien team, and he is having a solid year. He finished third in the Epsom Derby in June. That race was just his fifth career start, and since then Japan has won back-to-back Group 1 events in his last two runs.

The most recent was the International Stakes at York in August. In that race, Japan was able to push forward in the final moments.

All of Sottsass’s races have taken place in France, and he also has a classic win after finishing first in the French Derby at Chantilly in June. It was in that race where he broke the track record and beat the French Guineas winner Persian King by two lengths.

After that, Sottsass took three months off the track until he returned eight days ago. He ran in a Group 2 contest on Arc Trials Day.

Magical’s current odds are at 10-1, and she has a good shot at upsetting the field. She has lost three matchups to Enable, but she won her second Group 1 in the Irish Champion Stakes at Leopardstown. Magical has only been defeated by Enable and Crystal Ocean, who is now retired.

Other possibilities in the field include Waldgeist, Anthony Van Dyck, Silverwave, Ghaiyyath, Musis Amica, French King, Blast Onepiece, Fierement, Kiseki, Mehdaayih, Matchwinner and Nagano Gold. While the general odds at William Hill have Enable at 8-11, Japan at 6-1 and Sottsass at 7-1 and Magical at 10-1, the rest of the field is in double-digits.

There’s still a possibility of more horses entered into the race. There will be a supplementary stage for the Arc today.