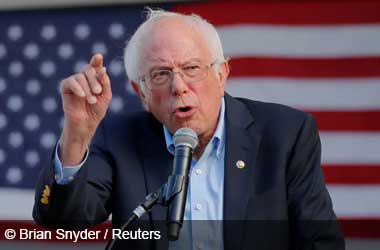 In the midst of tense negotiations between NFL officials and player representatives towards a new collective-bargaining agreement, some NFL owners have expressed their concern that a Bernie Sanders presidential run could negatively impact the U.S. stock market. Sanders appears to be the frontrunner for the Democratic presidential nomination.

Bernie Sanders has pledged to increase the taxes paid by the richest Americans to alleviate the economic inequality in the U.S., which has increased to its highest level in 50 years, according to a report released by the Census Bureau in 2019.

The possibility of a Sanders run has incentivized NFL owners to hammer out an agreement with its players while the market is strong—the labor talks involve the negotiation of media rights worth tens of billions of dollars.

The NFL’s current labor deal is set to expire after the 2020 season. The NFL’s deal with ESPN for “Monday Night Football” will expire the following year, the first among many expiring deals. Once a new collective-bargaining deal is secured, the NFL will be free to negotiate for media rights.

NFL owners are also preparing for a potential ratings hit during the 2020 elections. The NFL’s television ratings dropped during 2016 and 2017, which many observers attributed to the 2016 presidential campaign.

The ongoing coronavirus epidemic is also feared to aggravate fears of economic stability worldwide. The Dow Jones Industrial Average took a roughly 2,000 point hit over the past week as countries such as Iran and South Korea reported their own coronavirus cases—raising the prospect of a global pandemic.

Last week, NFL owners voted to approve the labor deal’s proposed terms, giving way for players to vote on the terms. The prospective deal increases the share players receive of NFL revenue, increases their minimum salaries, and a reduction of full-contact practices during the offseason.

However, the new terms come with the NFL owners’ insistence on expanding the regular season and postseason—adding up to 17 regular season games to the league schedule. Many NFL players have spoken out against the expansion due to health concerns.

NFL owners have stated that they are willing to forgo a finalized labor deal and play out the 2020 season if no agreement takes place. A player vote is set to take place by the end of the week.