Crypto Community Concerned About Lack Of Decentralization In EOS

An order by Sam Sapoznick, who has signed as ECAF (EOS Core Arbitration Forum) Interim Emergency Arbitrator, has ordered EOS Block Producers to freeze 27 accounts and keys indefinitely. This has raised questions about the decentralized, trustless, immutable nature of EOS blockchain. According to Chainriftxxx, a London-based Block Producer candidate, Dan Larimer, CTO of EOS, had stated on June 20 that the arbitration on the EOS platform will follow the below-mentioned ethics:

However, the method adopted to freeze 27 accounts on June 22 is in total contrast to what was said by Larimer. The ECAF issued an order to freeze accounts without giving any reason and simply stated that “the logic and reasoning for this order will be posted at a later date”.

Notably, the same method was adopted in the previous order that resulted in freezing of seven EOS accounts, believed to be a part of a phishing scam. The fallout from the decision to freeze seven accounts was visible quickly thereafter. Steemit user “anahita” has mentioned that he had acquired one of the frozen accounts in a provable good faith transaction a few days before. The unilateral action of ECAF and BPs, according to “anahita”, has harmed innocent and constitution abiding EOS users in the process. The current governance process has created such issues.

Even the bug that halted the blockchain last week was sorted out through a conference call. This disappointed investors and has raised concerns about lack of decentralization. While some investors believe that it is the right way to handle thieves, some believe that the entire action is illegal as arbitrators were not elected by stakeholders. According to EOS42, a block producer candidate based in London, any of the frozen accounts can be unlocked based on consensus. A blog on a website named EOS Emergency states that the attempted hacking is not an EOSio problem, but that hackers were opening fake registration portals that are being used by careless token holders. 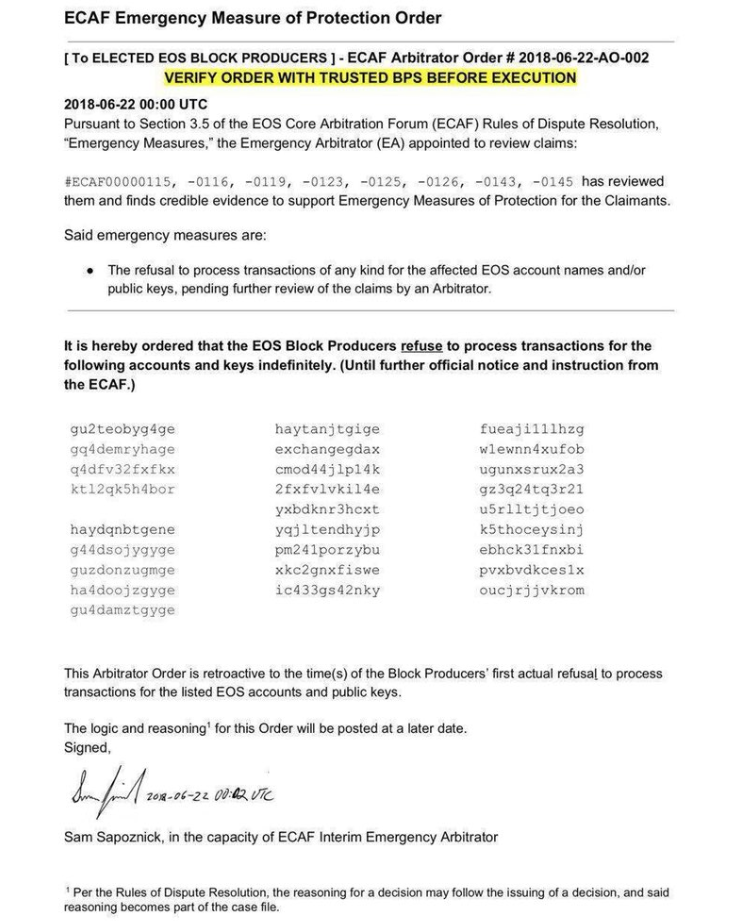 An administrator of the EOS community on Telegram, going by the username Sandwich, has explained that the situation is temporary and the “arbitration process is in development. This was a unique situation”.

“Look, I wrote the script that created the decentralized snapshot. I’ve investigated nearly 100 different cases in order to create the most fair and accurate snapshot possible. I was aware of this scam, but there was nothing that could be done at the moment to handle it in an objective way. Arbitration post-freeze was the only option. If you map those account names to their Ethereum addresses, you will see a common transaction among all of them to a contract that is used as a proof.”

When discussing about the need to be more transparent while taking such decisions, Alon Shvartsman, a representative of the LiquidEOS block producer said the arbitration process could have been better.

“Yes, we believe in transparency. It’s important for the community to know that there are mechanisms in place to protect and secure from malicious actors. Transparency between ECAF, BPs, and the community is crucial for the integrity of the network.”

Tron To Offer Reward For Migrating From Ethereum To Its Mainnet