Sevilla shock United, as Roma go through in the Champions League

On Tuesday night, the identity of two more of this season’s Champions League quarter-finalists was revealed. Here is what happened on a night of drama in the Champions League last 16 second legs: 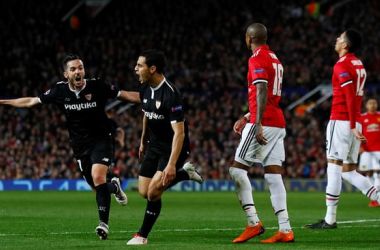 Manchester United headed into their second leg at Old Trafford against Spanish side Sevilla as favourites to go through. The first leg finished goalless at the Sanchez Pizjuan and the Red Devils had such a strong home record.

However, Jose Mourinho’s team struggled against a highly disciplined display by the visitors, with the visitors coming out 2-1 on the night and on aggregate.

The first half produced very little of note, although Sevilla goalkeeper Sergio Rico was called into action on two occasions. The tie looked to be heading for extra time until the 74th minute and Sevilla’s opening goal. Substitute Wissam Ben Yedder picked up the ball and from around 18 yards out fired into the bottom corner of David De Gea’s net.

The goal meant that the home side then needed two goals to win the tie. However, the visitors scored a second goal 77 minutes. Joaquin Correa produced a superb far post cross to Ben Yedder, whose header on goal De Gea flapped at before the ball went over the line despite the Spaniard’s best efforts.

United should have been back in the game soon afterwards. However, centre-back Chris Smalling fluffed a golden opportunity to half the deficit. United striker Romelu Lukaku also missed a chance from close-range, as the Red Devils attempted to pull themselves back into the tie.

Lukaku did get on the scoresheet, producing a powerful effort from inside the Sevilla area from Marcus Rashford’s corner kick. Ben Yedder could have sealed the game when put clean through on goal, only for De Gea to make a good save with his legs.

United’s attempts at finding the necessary goals were thwarted by the Andalucian’s and Vincenzo Montella’s side pulled off a famous victory at Old Trafford. However, whoever they face in the last eight, the Spaniards are likely to be underdogs to progress.

Roma progressed past the Ukrainian giants with a 1-0 win over Shakhtar Donetsk, to make the aggregate score 2-2 and seal progression via the away goals rule.

The only goal of the game arrived on 52 minutes. Dutch midfielder Kevin Strootman played a ball over the top of the Shakhtar defence to striker Edin Dzeko and the former Manchester City star poked the ball past the outrushing Andriy Pyatov.

Shakhtar’s hopes of getting back into this tie were all but extinguished with 11 minutes left on the clock, as defender Ivan Ordets was shown a straight red card for fouling goalscorer Dzeko on the edge of the Shakhtar area.

The incident caused a mass brawl. However, Roma held on to qualify for the quarter-finals of the Champions League for the first time in a decade. Just like Sevilla, Roma are likely to be underdogs in their last eight tie, with a number of Europe’s big hitters already in the last eight draw.

How far can Sevilla and Roma go in the Champions League?